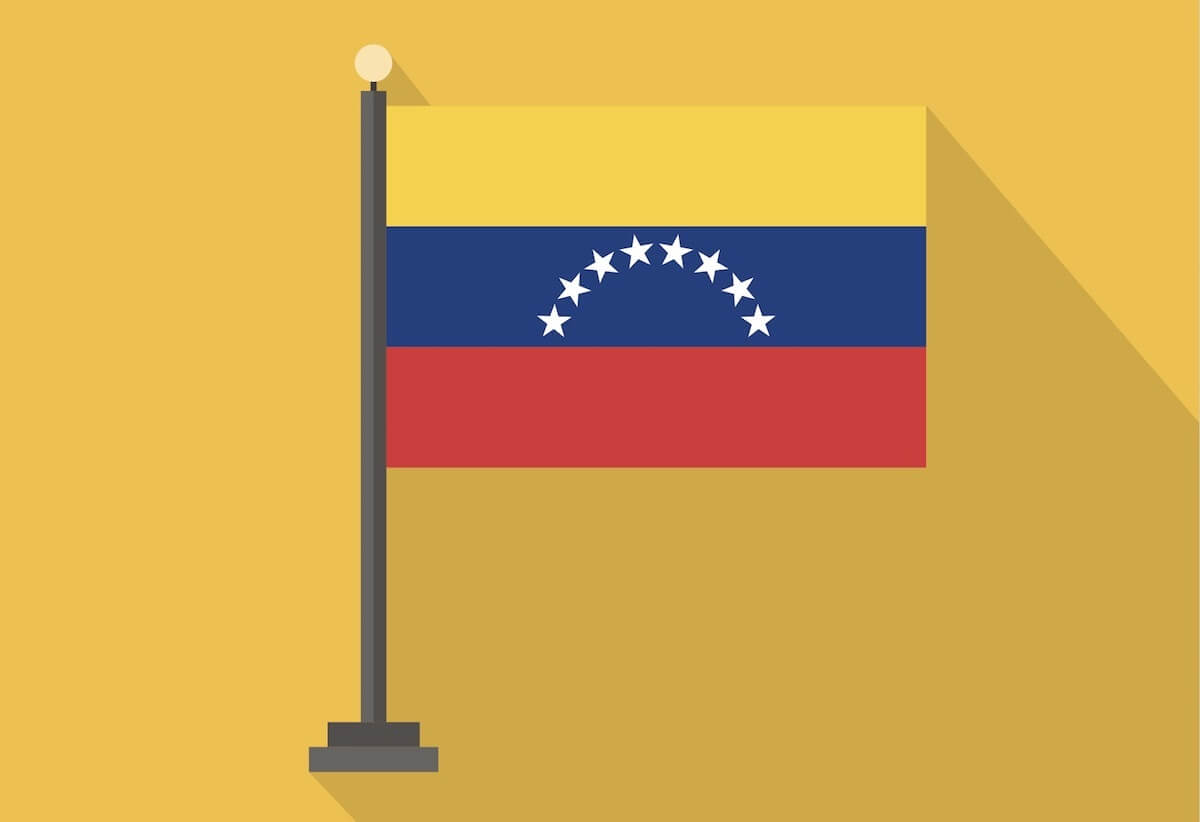 Bitcoin Mining is A Risky Prospect

Asking a Bitcoin miner, that lives in Venezuela, how their mining operation is doing could prove to be a difficult task. That is because, Bitcoin miners, along with those who mine any cryptocurrency are hard to find. They are all operating underground, secretly to avoid being arrested by the nation’s police forces. Police raids in the South American country have become so frequent, that those who mine are simply too afraid to do it openly.

While the only thing that could save the nation is digital currencies, fighting the government has become the biggest hurdle to achieve what is needed for the country to survive.

Bitcoin Mining is Not Illegal

If the situation in Venezuela was one where it was illegal to mine Bitcoin, then this would be a good reason for miners there to live in fear. However, it is completely legal to mine Bitcoin in Venezuela. Yet, police continue to crackdown and miners continue to go to jail. Most of those arrested are charged with crimes ranging from theft of utilities all the way to money laundering, and even terrorism.

While the actual reason behind the arrests is unknown, many there say that it is due to a corrupt government, arresting people to gain the mining hardware. Others have speculated that the government finds Bitcoin and other cryptocurrencies a threat to the national currency, the Bolivar. In any scenario, miners in Venezuela live in fear of being arrested every single day.

When asked by a CNBC reporter why the arrests were being made, a detective from one of Venezuela’s police forces explained that the nation’s electricity is subsidized by the government and citizens cannot use more than their fair share. When they do, it is considered theft of utilities.

It is this government control of electricity that allows police to catch miners. All they have to do is simply watch the electricity usage and look for substantial increases. Bitcoin mining especially uses a lot of power. One Venezuelan miner said that he stays safe by not telling anyone that he mines Bitcoin. None of his friends know at all. Another miner has his mining operation spread out over multiple locations to distribute the power usage more evenly. They have come up with creative ways to stay under the radar, yet they live every day, in fear of being caught and jailed.

A Nation in Crisis

Looking at the situation in Venezuela, it is easy to see why anyone would take the risk. In the last 5 years, the Bolivar has lost 99% of its value. In 2016, whole sale price inflation increased by an 470% according to the IMF. In the same report, the IMF shows an expected acceleration of wholesale price inflation to reach over 1100% th1100%is year. The once, richest nation in South America is now in a dire state of emergency.

The government, specifically the president of Venezuela, Nicolas Maduro has come under recent attack from the United States. President Donald Trump has issued sanctions against the struggling country, citing that Maduro is heading towards dictatorship. Maduro has stated publicly that these sanctions imposed by the United States are the reason that his country is unable to meet its obligations in paying off debts. Just this week, The Chilean National Bank has cut off Venezuela’s credit line due to the uncertainty of Venezuela’s ability to pay. 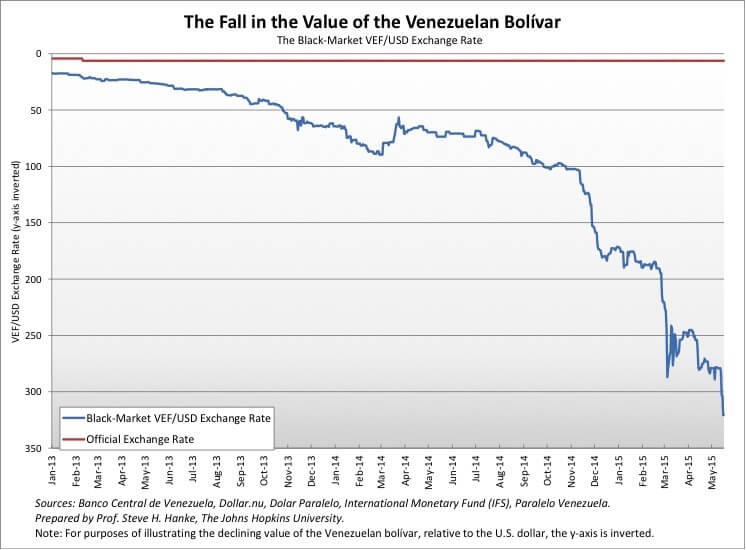 Digital Currencies Could Help but Blocked

While the nation is primed for digital currencies, the very government that is supposed to protect its citizens is what is standing in the way. As millions fight to get the very basics, like food and toilet paper, the government continues to be the barrier between its citizens and survival. Using the excuse that the government fears that digital currencies, Bitcoin specifically, can hurt the value of the Bolivar are thin at best. The Bolivar has lost 99% of its value over the past 5 years. It is this lack of confidence in the Bolivar that has put Venezuela into the critical state that it is currently experiencing.

Instead of allowing the nation’s citizens to use cryptocurrency mining as a way to help stabilize the economy, the government is causing greater turmoil and suffering. In fact, president Maduro should not only be allowing the miners in Venezuela to mine Bitcoin, but he should be promoting it. However, in his latest address to the nation, he told the citizens of Venezuela to eat rabbits instead of keeping them as pets to help alleviate the shortages of food facing the millions who call Venezuela home.

Venezuelan Living Abroad Gets the Word Out

The situation in the Venezuelan cryptocurrency world has only been brought to light because of the efforts of Randy Brito, a Venezuelan who fled to Spain with his family some years ago. He owns and operates Bitcoin Venezuela. Acting as an intermediary, he was able to set up remote interviews between several Venezuelan Bitcoin miners and CNBC.

During the interviews, the Venezuelans wore masks, asked that their voices be changed and that their real names not be used. This is because of the fear they have of getting arrested. While all of their situations are different, the one thing they all have in common is that mining has become the only way that they can afford to feed their families. In one instance, a woman said she was working 3 jobs and mining still accounted for more than 80% of her income.

The nation is experiencing hyperinflation, a situation in which the concept of inflation is meaningless. Hyperinflation, while rare, has happened many times in the 20th century. Countries like Germany, China, Russia and Argentina all experienced it. Zimbabwe was the most recent nation, before Venezuela, to experience a Hyperinflation crisis. 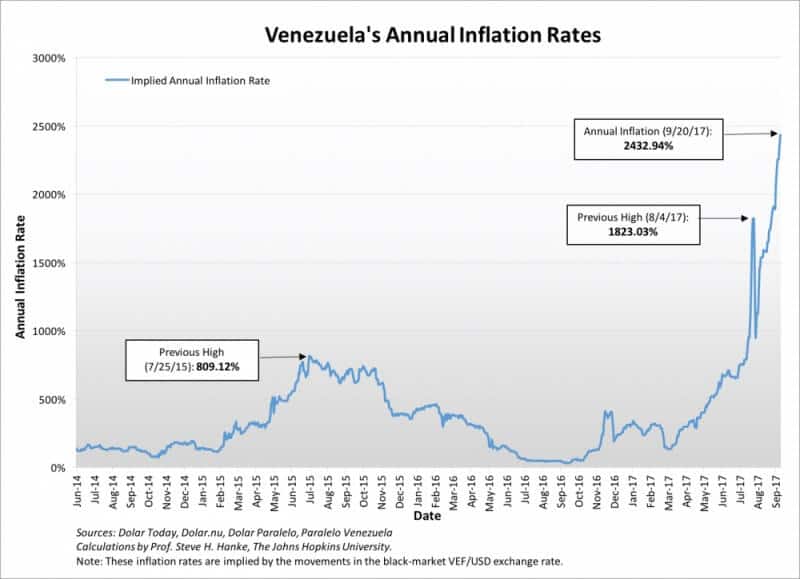 The solution is usually an automatic response to the crisis by trading in US Dollars or other strong currencies. In the 1990’s, the former Yugoslavia began trading in German marks and it quickly stabilized the economy. In Venezuela, there simply aren’t enough Dollars, Euros or any other currency to allow this to happen. That of course leaves Bitcoin and other digital currencies. The situation is perfect for the nation to utilize cryptocurrencies as a way to bring their nation out of the dire straits they are in. yet, it is not being allowed.

Whether it was the German Mark, the US Dollar or another did not matter. As long as the currency was strong and in plentiful supply that it could be widely adopted, it worked. This again, opens the door for Bitcoin and other digital currencies to save the day.

Whether or not President Maduro sees digital currencies as a threat to his reign as leader or not is unknown, but the evidence sure looks to suggest just that. Even though he claims he is not seeking to be dictator, complete control of digital currency would be a great way for him to solidify just that. Either that, or it would make him the savior of the nation, hopefully overshadowing the fact that e is the main reason they are in trouble now.

Daniel Osorio, president of Andean Capital Advisors (ACA) states that Venezuela could not pay its debt liabilities without the help of Russia and China. Venezuela has the largest oil reserve in the world, with 300 Billion barrels of proven oil reserves. While that is enough motivation for countries like Russia and China to ensure that Venezuela doesn’t default on its loans, it doesn’t help the struggling people who live there.

An Expensive Lunch Shows Why Venezuela May Turn to Bitcoin

In the same interview, Osorio said that it costs him $4 to $5 (usd) for lunch when he visits, which is the equivalent of 23,000 Bolivar at black market rates. To pay the restaurant owner, you would need a backpack full of cash. Instead, shop owners now give their customers their banking info and customers wire the money to the shop owner’s account. This is creating a truly cashless society.

Venezuelans have an opportunity to survive on their own, legally and in a way, that is acceptable. Government corruption, being the only barrier to this survival method is cause for concern. Continuing to arrest people for mining Bitcoin or other cryptocurrencies, given the extreme factors of the situation is akin to genocide. The people of Venezuela are fighting for their basic human right of survival and the government is their opponent.