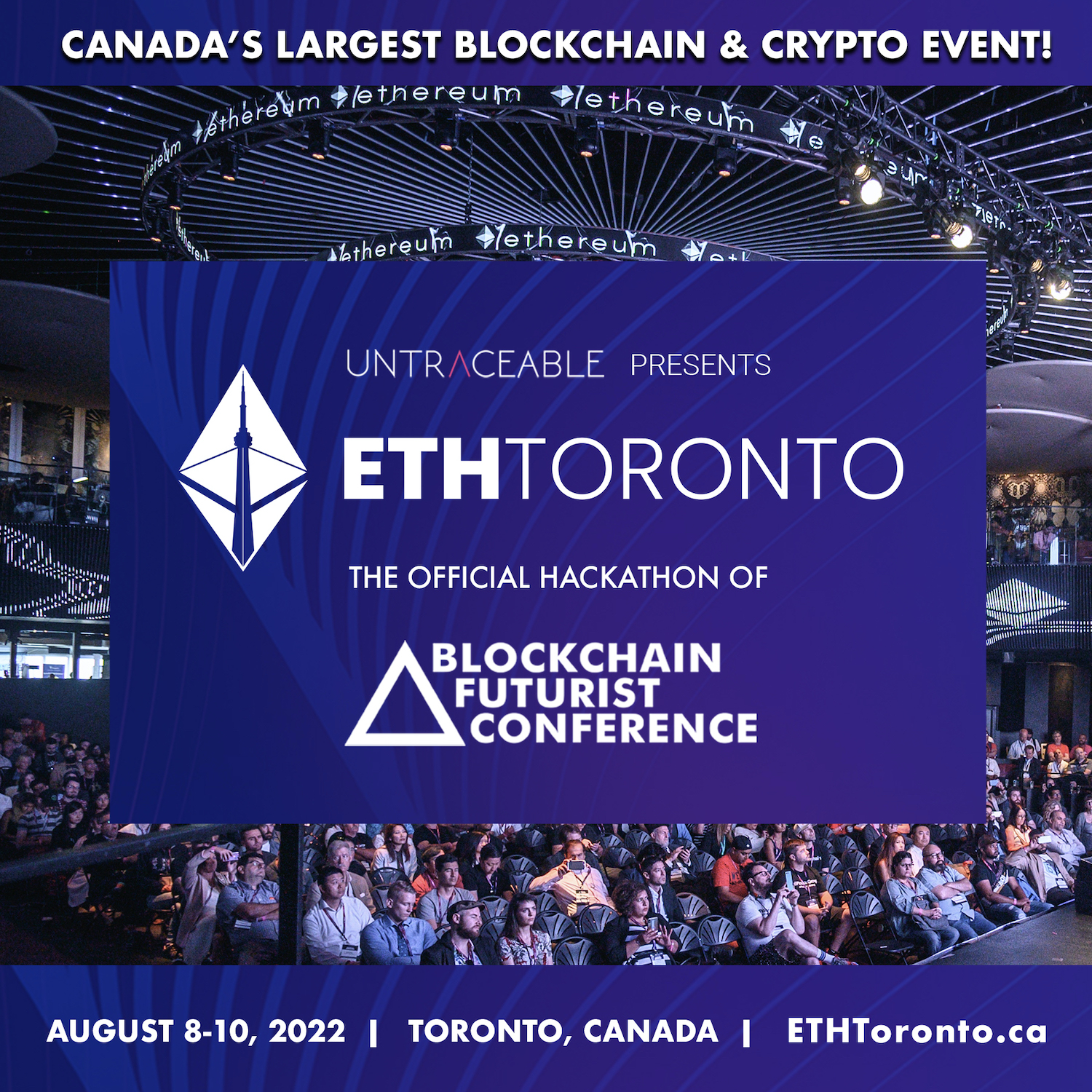 TORONTO, APRIL 26, 2022 – Untraceable Events announces ETHToronto Hackathon on August 8-10, 2022 as part of the fourth annual Blockchain Futurist Conference. New to the conference this year, ETHToronto Hackathon, will be a three-day hackathon that puts developers in competition for cryptocurrency bounties. Participants will be challenged to “build the future” by developing the next innovation in blockchain technology.

Contestants can meet other developers, connect with hiring companies, attend speaker sessions, and compete to present their builds on the Futurist mainstage. In the past, Untraceable Events has given away up to 35 Bitcoin to one top winner at their 2014 hackathon.

Hackathon organizer Tracy Leparulo, the founder of Untraceable Events, organized the original Ethereum hackathon 2014. Other past events include Bitcoin Expo 2014, BlockGeeks Hackathon in 2016, and the original ETHWaterloo in 2017. Untraceable’s previous hackathons have launched major crypto projects such as CryptoKitties at their 2017 ETHWaterloo and OpenBazaar at their 2014 Hackathon, invested in by Andreessen Horowitz.

“Toronto is the birthplace of Ethereum, and, since those early days, we have witnessed this city grow into a vibrant hub for blockchain innovation,” said Untraceable Founder & CEO, Tracy Leparulo. “We are excited to see the ideas and projects that come from this year’s event and the impact they have on the future.”

The hackathon will take place at the immersive Rebel Entertainment Complex and Cabana in Toronto. The Hacker Dome, the venue’s 40,000 square foot indoor dome, will offer a quiet space for developers to build on the latest blockchain technology. Organizers expect more than 500 developers from around the world to attend and lend their talents to the event.

Organized by Untraceable Events and hosted at Blockchain Futurist Conference, the hackathon has the support of other key partners including CryptoChicks, ETHDenver, and SporkDAO.

“I am excited to be part of ETHToronto in the city where Ethereum was born. MetisDAO and CryptoChicks are proud to support this incredible hackathon and conference, as these events are helping to bring thousands of people together to celebrate decentralization and the freedoms it enables,,” said Elena Sinelnikova, CEO MetisDAO, a top sponsor of this year’s event, and CoFounder of CryptoChicks”

ETHToronto is a community event, free to attend and build. To join, apply at https://ethtoronto.ca/

Interested in more information? Contact the team at Untraceable Team. Learn about the future and join the Web3 movement with Blockchain Futurist Conference. The future is here.

For all general inquiries: events(at)untraceableinc(dot)com